WRONGFUL CONVICTIONS - THE REASON I DEFEND PEOPLE CHARGED WITH CRIMES

WHY I DEFEND PEOPLE ACCUSED OF DRUNK DRIVING AND OTHER CRIMES

Two stories have prompted me to write this blog about those wrongfully convicted and to answer the question I am frequently asked, which is: “How can you defend drunk drivers?” or "How can you defend criminals?"

The reality is that there are several legal concepts that often go unnoticed by the public at large and even juries, one of which is the “Presumption of Innocence”. Another is “Proof Beyond a Reasonable Doubt”. And I believe another significant one is the Circumstantial Evidence instruction. All of these rules of law that apply to jury deliberations are oftentimes glossed over by judges and prosecutors alike, thus leaving the jury to their own devices and oftentimes leading them to apply the wrong standard of law to their deliberations. Public opinion does not help in the cause to reduce the number of wrongful convictions. 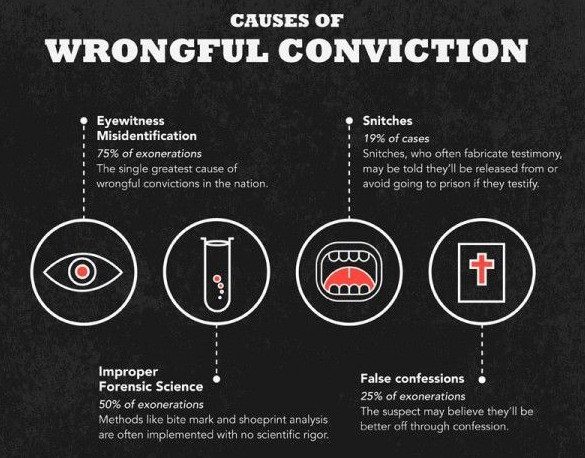 An article posted in Huffington Post’s Crime Section, (which is a great publication by the way), began an article entitled: “A Record Number Of People Were Exonerated In 2015 For Crimes They Didn’t Commit” by stating: “The Netfilx hit true-crime series “Making a Murderer” leaves many people wondering: Just how common is the story of a wrongful conviction in America’s criminal justice system? Too common, according a new report that tracks exonerations.” This is one of the truest statements ever made. It is far too common and changes need to be made in order to ensure that we do not continue down this path of wrongfully convicting the innocent. As expressed by the English jurist William Blackstone in his seminal work, Commentaries on the Laws of England, published in the 1760s: “It is better that ten guilty persons escape than that one innocent suffer". Historically, the details of this sentiment have varied, but the message that government and the courts must err on the side of innocence has remained constant. It is my fear that if we continue to deviate from this basic precept of law, there will be no end in sight to the astounding numbers of those who are wrongfully convicted.

According to the Huffington Post article, researchers found that 149 people were cleared in 2015 for crimes they did not commit, more than any other year in American history according to a recent report published by the National Registry of Exonerations, which is a project from the University of Michigan’s Law School. By comparison, 139 people were exonerated in 2014. The number has risen most years since 2005, when 61 people were cleared of crimes they didn't commit according to the article and study.

What is more alarming than just the wrongful conviction itself is the amount of time that it took for the realization to occur that these people were wrongfully convicted as the men and women who were cleared last year had, on average, served 14.5 years in prison by the time it was learned that they were in fact wrongfully convicted. Some had even been on death row. Others were younger than 18 when they were convicted and/or had intellectual disabilities; all of which had been swept into a justice system that is supposed to be based on the presumption of innocence, but failed.

As the article indicated: “The high number of exonerations shows the widespread problems with the system and likely “’points to a much larger number of false convictions’” that have not yet been reversed, the report said.” The author proceeded to set forth some patterns the organization found in the 2015 exonerations, which are as follows:

Almost 20 percent of exonerations in 2015 were for convictions based on false confessions, which was a record according to the publication. Those cases were often homicides involving defendants who were under 18 and/or intellectually disabled. The criminal justice system has a long history of stomping on the rights of individuals that fit within those categories. Some say money can buy justice; but the reality is: money can buy a good attorney who can find those injustices which in turn leads to justice. It all depends on how you look at it. Good lawyers are not cheap and cheap lawyers are usually not good.
As the author of the article pointed out, in a separate analysis of the hundreds of cases since 1989, false confessions were found to be a leading cause of wrongful convictions, according to the Innocence Project, a nonprofit dedicated to correcting wrongful convictions. Overall, about 31 percent of wrongful conviction cases included a false confession. For homicides, that number balloons to 63 percent.

An innocent person pleading guilty to a crime they did not commit may seem unfathomable to most; but the "National Registry of Exonerations" said that the number of false guilty pleas has been steadily increasing for seven years, and has risen sharply in the past two years. This does not surprise me, though, as the article points out that 40 percent of the people exonerated in 2015 were convicted based on guilty pleas made by innocent defendants – another record. The majority of these cases involved drugs, but some were homicide cases so the stakes were high.

As the article points out, plea bargains can be an efficient way to resolve cases without draining taxpayer resources. They are not always bad; but a 2013 Human Rights Watch study found that the U.S. system often creates situations where prosecutors will "strong-arm" a defendant into a plea deal. And the deep fear of a harsh sentence can lead an innocent defendant to plead guilty in order to obtain a shorter prison term, even if they're accused wrongfully. Although not mentioned in the article, the case of Brian Banks is a prime example of how this can occur.

Brian Banks was a 16-year-old junior and had made a verbal commitment to sign with Southern Cal when Wanetta Gibson, a Long Beach Poly high school classmate, accused him of the rape. Gibson recanted her claim and offered to help Banks clear his name after he was released from prison. That helped lead to the conviction being overturned by a California Court and Banks' record was cleared on May 12, 2012.

Banks pleaded guilty to a crime that he did not commit because he was afraid to put the case to a jury based on his fear that the jury would convict him solely based on race. Since then he has become a spokesman for the California Innocence Project, which works to exonerate the wrongly accused. This is an example of a person who pleads guilty to a crime he/she did not commit for fear that the punishment will be worse if he/she were to proceed to trial and he is now a professional football player.

No Crime Was Actually Committed, Yet Some Still Plead Guilty Based on Fear

According to the article, in about half of the exonerations in 2015 no crime was actually committed by the person put behind bars, yet another record according to the report. Most of these cases involved drugs; but some included homicide and arson.

Those of us who defend DUI charges have come to realize that crime lab errors are common. Many of last year's exonerations involved flawed or invalid forensic evidence.

According to the Innocence Project, improper forensic science is a leading cause of wrongful convictions. Too often, the group says, forensic experts speculate when they testify, asserting conclusions that stretch the science. Further, some forensic techniques are not backed by the research, but are still presented to juries as fact. That defense attorneys are sometimes precluded from venturing into this subject matter in trial leads to erroneous convictions.

The FBI has admitted that from 1972 to 1999, almost every examiner in the bureau's elite forensic sciences unit gave flawed testimony in nearly every trial in which they presented evidence. Forensic fields like ballistics, bloodstain pattern identification and footprint and tire print analysis, have been “long accepted by the courts as largely infallible,” Kozinski said in his paper, arguing that the techniques should be viewed by juries with skepticism.

How Many More Wrongful Convictions Will It Take to Change This Flawed System?

According to the publication, there is no clear data on how many innocent people have been wrongfully convicted. The Innocence Project, citing to multiple studies, estimates from 2 to 5 percent of prisoners are actually innocent. The U.S., which leads the world in incarceration of its citizens, has approximately 2 million people behind bars. That means a wrongful conviction rate of 1 percent would translate to 20,000 people punished for crimes they didn't commit. On death row, 1 in 25 are likely innocent, according to another recent study. As stated, “It is better that ten guilty persons escape than that one innocent suffer" and according to these statistics there we have more than one innocent person suffering. This leads to the ultimate question: “How many more wrongful convictions will it take to change this flawed system?”

Huffington Post: “A Record Number of People Were Exonerated In 2015 for Crimes They Didn’t Commit”

Special Thanks: "The Innocence Project"