I was recently reading a news article about a 26 year old Bakersfield, California man convicted in the drunken driving crash that killed a young woman and who was sentenced Thursday to 15 years to life in prison. The longer I practice, the more I come across these types of cases. They are always sad. There are no winners – everyone loses. 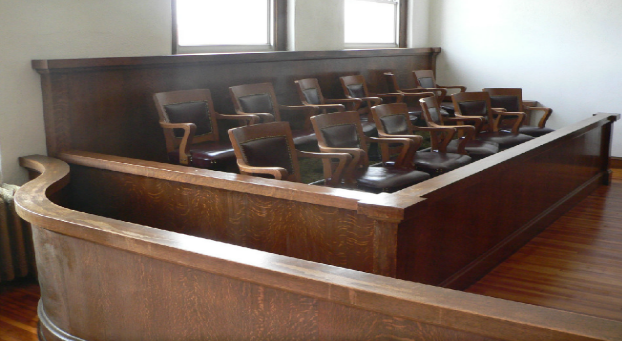 As is usually the case, a spokeswoman for Mothers Against Drunk Driving was on hand to support the victim's family, which is a good thing – these families need support, but so does the family of the defendant – they need support to – 15 years to life is not something to take lightly. And Carla Pearson, the MADD advocate in this case agrees: “drunken driving crashes take away loved ones, and that includes victims who are killed – and actually, the drivers who end up in jail.” So she too understands that everyone loses. As I said, there are no winners in “DUI Death” or “DUI Vehicular Manslaughter” cases.

But for the grace of God, there goes I, is an adage that came to mind as I read the story. I believe the reality of the crime is that nearly every person who has driven after drinking alcohol may have been guilty of committing the crime without even knowing it because the manner in which each person metabolizes alcohol varies from person-to-person and from occasion-to-occasion. As a result, I believe that there are very few people who can say that they are 100% positive that they were not driving under the influence under the eyes of the law on every occasion when they drank alcohol and then drove – it’s just the reality of drinking and driving.

Nevertheless, the crime is a dangerous one and the issue of whether it is on the rise or on the decline is a matter of considerable discussion as of late; but the reason for the rise or the fall are equally in debate: is it fewer people are driving drunk or is that there are fewer officers on the road enforcing the DUI statutes? Regardless, driving under the influence is a dangerous crime and could impact any one’s life in an instant.

So why do I defend those charged with DUI? Because I do not always believe that the government has proven or is able to prove their case beyond a reasonable doubt or doubts and that the person is not guilty of the crime of driving under the influence. I value the rights we have as a society too much to allow one guilty person to be convicted of a crime he or she may not have actually committed. You have to remember, they are "Presumed Innocent" until the prosecution has proven that he or she is guilty beyond a reasonable doubt – that is the law – the question therefore becomes: what doubt or doubts are in fact reasonable?

REASONABLE DOUBT IS AN ELUSIVE TERM

Reasonable doubt is an elusive term – I cannot even say as to whether it can be defined in such a way as to get 100% of the population to agree. It is an amorphous legal term that is as hard to define in words.

To make matters worse, every person’s definition of what is or is not reasonable is different – what is reasonable to one person may not be reasonable to another person – and both of these people may still be reasonable people with reasonable interpretations of the evidence before them even though I may disagree with that person.

THE LEGAL DEFINITION OF "REASONABLE DOUBT"

Reasonable doubt is defined in the law, at least California law, as follows:

Proof beyond a reasonable doubt is proof that leaves you with an abiding conviction that the charge is true. The evidence need not eliminate all possible doubt because everything in life is open to some possible or imaginary doubt.

In deciding whether the People have proved their case beyond a reasonable doubt, you must impartially compare and consider all the evidence that was received throughout the entire trial. Unless the evidence proves the defendant[s] guilty beyond a reasonable doubt, (he/she/they) (is/are) entitled to an acquittal and you must find (him/her/them) not guilty.

Okay. That’s quite a bit to process in one reading. Let’s break it down in relevant part:

A defendant in a criminal case is presumed to be innocent. This presumption requires that the People prove each element of a crime [and special allegation] beyond a reasonable doubt.

These make up the Presumption of Innocence portion of the jury instructions, which will be discussed in a later post. But suffice it to say, the person is presumed innocent until the government has proven beyond a reasonable doubt that the person is guilty of the crime charged – that is all we need to know for right now.

Proof beyond a reasonable doubt is proof that leaves you with an abiding conviction that the charge is true. The evidence need not eliminate all possible doubt because everything in life is open to some possible or imaginary doubt.

In deciding whether the People have proved their case beyond a reasonable doubt, you must impartially compare and consider all the evidence that was received throughout the entire trial.

Unless the evidence proves the defendant[s] guilty beyond a reasonable doubt, (he/she/they) (is/are) entitled to an acquittal and you must find (him/her/them) not guilty.

The definition of reasonable doubt speaks of an abiding conviction, which is a belief that you can feel comfortable with hours, days, weeks, months or even years from the date of the judgment and that you will remain confident that you did not have any reasonable doubt or doubts as to the guilt or innocence of the defendant you convicted of a crime.

As we age, I believe having an abiding conviction about much of anything is difficult. As stated previously, we are all shaped by our life experiences and those life experiences that may occur after a jury verdict could change your mind from what you once thought was unreasonable you may later find to be reasonable – this is why it is important to be 100% sure that you really do not have any reasonable doubt as to whether the charge is true.

Now I am aware that the instruction also states that: “The evidence need not eliminate all possible doubt because everything in life is open to some possible or imaginary doubt”; but I am not talking about some remote or imaginary doubt here. What I am talking about here are those doubts that cause a juror to say: “Well, it seems that the defendant is more likely guilty, so I am going to go with guilty.” This is the wrong standard – the standard of more likely than not applies to civil matters using the “Preponderance of the Evidence” standard – this is the legal standard we apply to disputes over money – it is not the legal standard we apply to criminal matters. The accompanying graph represents the different standards of proof and the significance of the proof beyond a reasonable doubt standard. 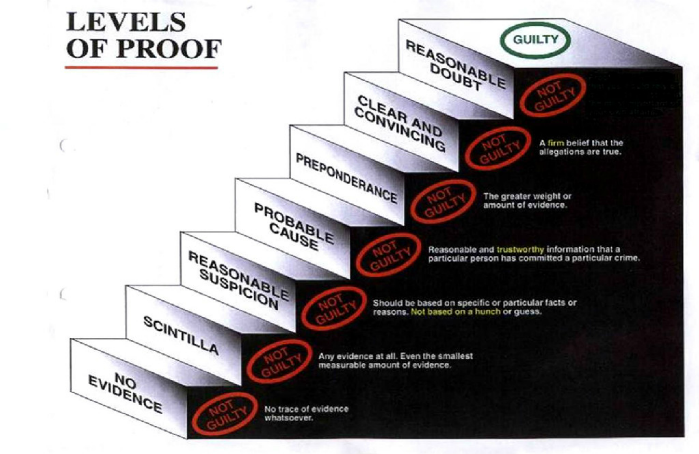 As the instructions require, the most important thing for any person to do as a juror is to impartially compare and consider all the evidence received throughout the trial to try to determine whether the prosecution has proven their case beyond a reasonable doubt, or at the exclusion of any reasonable doubt.