DUI checkpoints, also known as Sobriety Checkpoints or Roadside Safety Checks, are the most common roadblocks that people may encounter. These checkpoints are set up by law enforcement agencies to check for impaired and/or drunk drivers on the roadways. They are typically set up along busy highways during public holidays, such as the 4th of July, Memorial Day, Easter, Christmas, and New Year's Eve to check for drunk drivers. 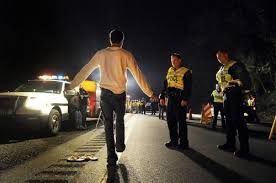 DUI Checkpoints act as a common tool to identify and arrest drunk drivers in Orange County, San Diego, Los Angeles Counties, and throughout the entire State of California. Read on to find out more about what happens at these DUI Checkpoints and the approach used by law enforcement officers when conducting DUI Investigations at DUI Sobriety Checkpoints, including Field Sobriety Testing.

WHAT HAPPENS AT A DUI CHECKPOINT?

A DUI Checkpoint typically consists of roadblocks along major intersections to stop motorists according to a neutral mathematical formula. Thereafter, to identify any signs of intoxication, and if the driver of one of these vehicles possesses signs of intoxication, he/she can be asked to submit to Field Sobriety Testing to help determine whether the person should or should not be driving. I recently came across an article by Attorney Paul Geller that set forth “Some of the Biggest Problems with Field Sobriety Tests”. I have also posted similar articles on the subject of the “Standardized Field Sobriety Tests”; but from a different perspective, which makes Mr. Geller’s post unique and worth the read. A DUI attorney in Teaneck, New Jersey, Benjamin Kelsen, also provides a good summary or overview of the “Standardized Field Sobriety Test Battery” that is also worth reading if you want to learn more about Field Sobriety Testing, whether at a DUI Sobriety Checkpoint or otherwise.

DUI Sobriety Checkpoints are supported under federal law as being constitutionally permissible, but are prohibited in certain states. Although there is a debate about whether DUI roadblocks may or may not be the best and/or most accurate method deployed by law enforcement, they have helped identify DUI drivers and reduced the number of alcohol-related fatalities on the roads according to NHTSA and other government agencies that support the use of DUI Sobriety Checkpoints. As a result, they have been deemed constitutionally acceptable and if you are in a State that implements them, such as California, you should expect to see or hear about at least one DUI Sobriety Checkpoint in your life.

Sobriety checkpoints act as an investigatory tactic or tool, allowing police to get a closer look at passing motorists. Drivers moving through the checkpoint are selected according to a neutral mathematical formula; which may be every 4th or 5th driver who may be stopped and detained briefly. Officials often check the tags and license plates during the brief stop, getting a quick whiff of the driver's breath at the same time. The officer also gets a chance to peer into the vehicle for a moment during questioning to see if anything looks suspicious if it is in plain view.

The thing to note is that as a driver, your constitutional rights still apply in a roadblock situation. Police will question you and stop you briefly, but they are not allowed to search your vehicle without probable cause. You have the right to remain silent and you are not required to answer any questions asked by the officer. Anyone trying to evade a roadblock may find themselves in trouble as police closely monitor cars approaching the checkpoint and will follow those vehicles attempting to evade the DUI Checkpoint looking for a Vehicle Code violation or some other violation of law to permit the stop and detention of the vehicle.

Despite the debate over whether DUI Sobriety Checkpoints are the best tool to detect drunk drivers or whether they are a waste of police resources and taxpayer money, is a debate that will probably go on forever; but they do help identify drunk drivers and have proven helpful in curbing the fight against DUI or drunk driving.

If you were stopped at a DUI Checkpoint or Sobriety Checkpoint, contact an experienced Orange County DUI Lawyer in order to ensure that the DUI Checkpoint was operated in a constitutionally permissible manner as the failure of law enforcement to do so could result in a dismissal of the DUI Charges.